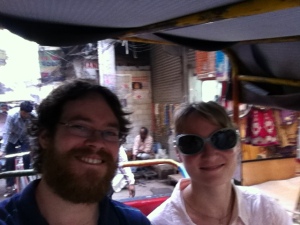 Headed down to the crowded Chandni Chowk market of Delhi today, where merchants pedal the same products as 350 years ago – the spice street still has all the spices,  ditto for jewelry, saris, shoes, etc. We bought raw cinnamon bark, which people chew for a snack here, various chicken, potato and veggie masala powders (masala means something akin to “mix”) and some ridiculously hot peppers, apparently good for running off unwanted neighbors at dinner time.

You anticipate the crowds, the shanties, the signs of minimalistic living. But modern niceties are woven through the crowded ancient city, often in an impressively bewildering way. After passing through street upon street with wildly-strung wires Josh asked me “How do you think electrician’s fix this stuff?” 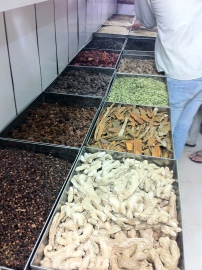 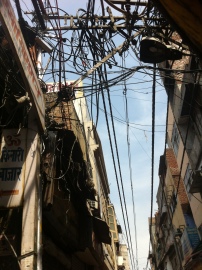 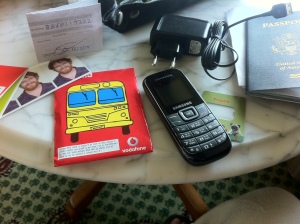 On our trip through the market we continued our (now 3-day) quest for the prepaid phone card. In India the purchase of a pre-paid sim card is quite involved as they try to crack down on terrorists communicating in the motherland.  As such, the application requires a photocopy of your passport, profile picture, visa if you’re foreign, and a 1 day wait period while the government approves your application. Once you qualify for the service, even international, is inspiringly cheap. Here’s to passing … hopefully soon …

One of our first sites was the Jama Masjid mosque, where women must don robes. A family wanted to take their pictures with me; Josh and I are guessing it’s because of my blond hair, but as neither of us speak a drop of Hindi, it’s just conjecture. 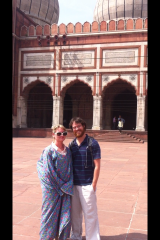 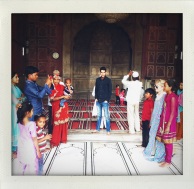 There are fewer signs of modern globalization in this big city than in the few others I’ve visited, but next door to the McDonalds we spied a Baptist church, as well as a couple advertisements with white men in underwaear … really weird.   But this mix of culture in one confined area was the will of Sha Jahan who built this “Old Delhi” or Shajahanabad.  On this same street you can find within 2 kms the baptist church a jain temple, a sikh temple, the islamic mosque and a hindu temple. 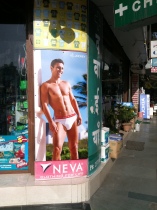 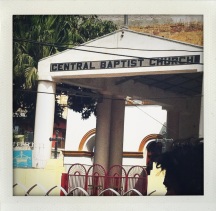 The street that used to be the center of town lined with fountains and beautiful markets is now something akin to a free for all…if you sit back and watch, you can imagine yourself in a theatre performance mashup of stomp, cirque du soleil and mario cart.  Hold your breath, look twice, watch your toes and leave the rules of the road behind as traffic flows more like water than traffic. 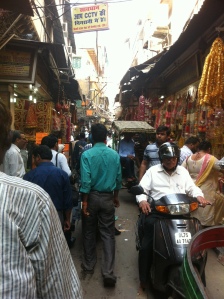